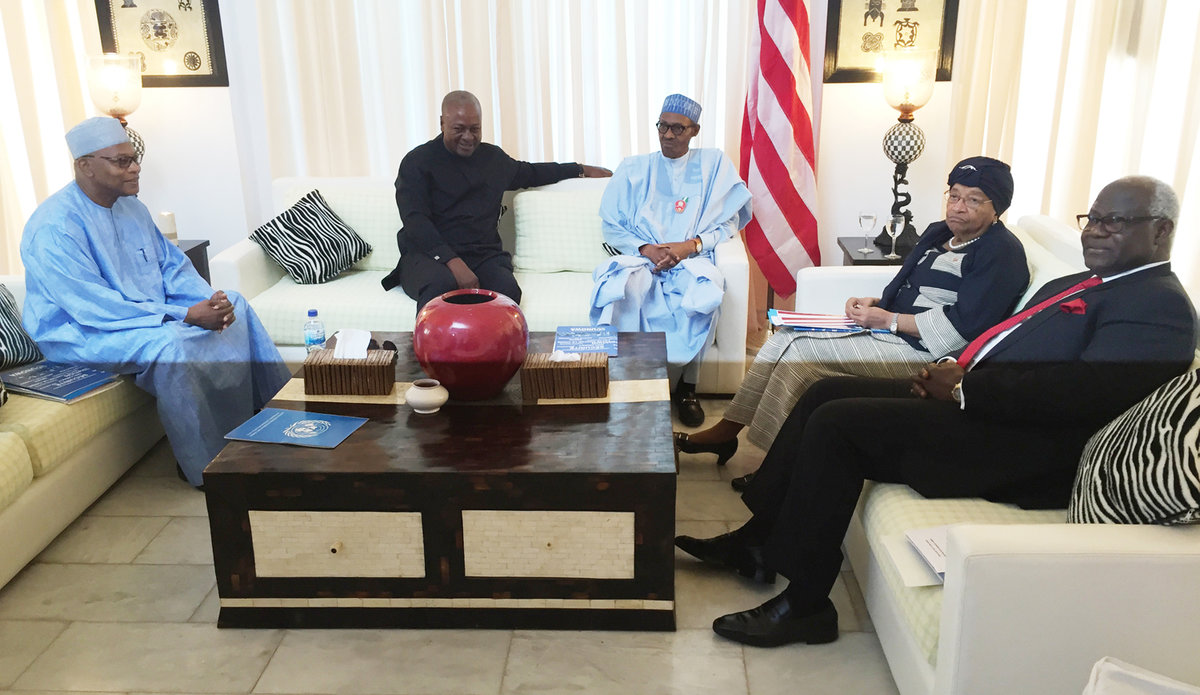 The SRSG Ibn Chambas meet with the Presidents of Nigeria, Sierra Leone, Ghana and Liberia about the situation in the Gambia. 13 december 2016 in Banjul

UNOWAS promotes dialogue among stakeholders with a view to build consensus to unblock disagreements through multiple good offices missions and support to regional organizations such as ECOWAS, MRU and other regional partners.

A number of West African and Sahel countries continue to be affected by political crises resulting from flawed or contested electoral processes, unconstitutional changes of government or other threats to constitutional legality and governance, which pose significant threats to the political, social and economic stabilization in the sub region.

States in West Africa and the Sahel taken individually or as a collective strive to consolidate democratic gains as a prerequisite for peace, stability and development; and an imperative for the prevention of the spread of transnational organised crime. Indeed, weak states are most vulnerable to and suitable siege for organised criminal groups. Prime amongst the contributing factors to state failure in West Africa and the Sahel are democratic deficit manifested in delayed, non-inclusive, violent or contested elections, impunity for corruption and other economic crimes as well as gross violations of human rights; economic injustice illustrated by unequal sharing of the benefit of the exploitation of natural resources, access to and opportunities for employment and wealth generation; and development-induced-displacement.

In his capacity as  Special Representative of the Secretary-General of the United Nations, the head of UNOWAS supports dialogue processes in West African and Sahel countries. Like in other parts of the world, disagreements by political and non- state actors over electoral processes, constitutional reforms, governance issues and other pertinent matters can cause protracted blockades, sharpen cleavages, create instability, and deflect attention from development efforts. Political and electoral systems, which are ill- equipped to synthesize public aspirations and transform them into tangible progress, are a recipe for widening the gulf between citizens and their elected representatives. As such, a well- functioning political process is a precondition of paramount importance for peace, stability, and development.

In such scenarios, the SRSG promotes dialogue among stakeholders with a view to build consensus. Often this involves multiple good offices missions to unblock disagreements. In the spirit of enhancing leverage and supporting regional organizations, he teams up with ECOWAS, the MRU, and other regional partners, in order to galvanize energies to find solutions. In the aftermath of the popular uprising in Burkina Faso in October 2014, for example, the SRSG represented the United Nations in a tri-partite follow-up and support group with the AU and ECOWAS to assist the democratic transition process, culminating into peaceful, free, and fair elections in November 2015. In Guinea, he spearheaded a national dialogue process which allowed the holding of free parliamentary elections in 2013, and subsequent presidential elections in November 2015. In the run-up to the presidential elections in Benin in February 2016, his engagement helped to solve, at the last minute, disagreements over the use of voter cards, allowing citizens to cast their ballots.

He is supported by a team that gathers and analyzes facts, maintains liaison with stakeholders, and prepares his missions. In addition, in close cooperation with regional partners and other UN bodies such as the Office of the High Commissioner for Human Rights or UNDP, UNOWAS also conducts assessment and early warning missions, which help to identify critical issues and put in motion preventive measures. Already well ahead of elections, UNOWAS also contributes its expertise to joint Electoral Needs Assessments, which take stock of political and other risks and define logistical and other needs to support peaceful, free, and fair elections. Substantive support is also provided to the mediation and facilitation component of ECOWAS. 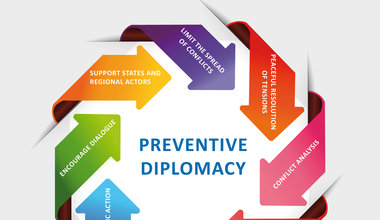