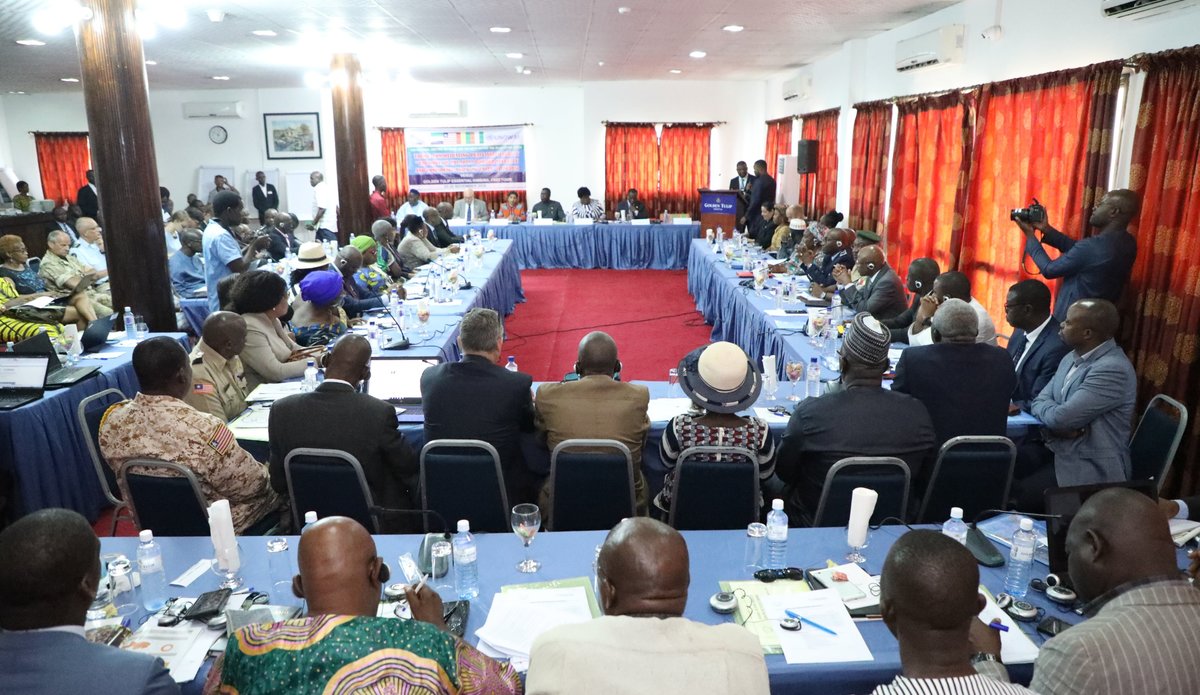 Meeting on Peace and Security within the Mano River Union, 25 November 2019 in Freetown, Sierra Leone.

In cooperation with the MRU, UNOWAS works to address the threat of cross-border movements of armed groups and weapons as well as illicit trafficking in the sub-region

Since 2009, UNOWAS intensified cooperation with the Mano River Union (MRU) with a focus on peace and security related initiatives.  Indeed, despite the continued efforts by countries of the Mano River Basin (Côte d’Ivoire, Guinea, Liberia and Sierra Leone) over the last decade to stabilize the region, it still remains unstable as a result of the porous nature of its borders, which facilitates the unhindered movement of armed and criminal groups.

The Security Council resolutions 2000 (2011), 2062 (2012) and 2066 (2012) encourage ECOWAS and the MRU to develop, with the support of UNOWAS, a sub-regional strategy to address the threat of cross-border movements of armed groups and weapons as well as illicit trafficking, with the assistance of UNOCI (United Nations Operations in Cote d’Ivoire), UNMIL (United Nations Missions in Liberia), UNIPSIL (United Nations Integrated Peacebuilding Mission in Sierra Leone) and the UNCT (United Nations Country Team) in Guinea.

Following these, member-states adopted the MRU Operational Plan on Peace and Security during the 21st Ordinary Session of the MRU Summit of Heads of State and Government held on 15 June 2012 in Conakry, Guinea. The Summit also endorsed the establishment of the Peace and Security Unit to oversee the implementation of the Plan, and also decided to establish a Steering Committee composed of MRU, ECOWAS and the UN to spearhead the development of the Security Strategy.

On 29 June 2013, a High Level Meeting on trans-border security in the Mano River Union (MRU), held in Dakar, established a steering Committee composed of MRU, ECOWAS (Economic Community of West African States) and the UN to spearhead the development of a Strategy for cross-border security and follow –up its adoption by the end of the year. The Steering Committee, jointly led by SRSG Said Djinnit, Ms Salamatu H Suleiman, ECOWAS Commissioner for Peace, Security and Political Affairs, and Hadja Sara Daraban Kaba, Secretary-General of the Mano River Union, delivered its mandate with the signing of a declaration, on 25 October 2013 in Dakar, by Heads of State and Government of the MRU member countries adopting the Strategy for Cross border Security in the Mano River Union.  In adopting the Strategy, Heads of State and Government encouraged the MRU Secretariat, ECOWAS and UNOWAS “to set up the Follow-up Committee, and continue their partnership for the effective implementation of this Strategy”.

UNOWAS’s current support to the MRU fits within the implementation of this Strategy. The MRU Security Strategy indeed states that UNOWAS is to work closely with UNMIL, UNIPSIL, UNOCI and UN Country Teams in Guinea, Côte d’Ivoire, Liberia and Sierra Leone, as well as UN entities such as UNDP, OHCHR, UNODC, UNW, UNFPA and UNICEF, towards a system-wide support to its implementation. This includes joint planning and action, regular consultations as well as resource mobilization (both within the UN and with other partners) to support the MRU in the implementation of the Security Strategy as a whole; and in the setting up and operationalization of MRU JSCBUs including through mobilizing international political support for border community development projects and Growth Triangle Initiatives. In addition the three Peace Keeping missions will put at the disposal of the MRU capacity building support and technical assistance in areas such as community development projects, promotion and protection of human rights, the fight against violence against women and children, the rule of law and security sector reform.

The MRU, ECOWAS and UNOWAS are also to establish tripartite mechanism for regular consultation and review of the implementation of the Strategy. (Strategy for cross-border security in the Mano River Union).