In the face of COVID-19, UNOWAS remains in solidarity with West Africa and the Sahel countries

In the face of COVID-19, UNOWAS remains in solidarity with West Africa and the Sahel countries

As soon as the COVID-19 pandemic erupted in the sub-region, the United Nations Office for West Africa and the Sahel, UNOWAS, was quickly mobilized to continue its work-and above all-to support the various governments in their fight against the spread of the Coronavirus.

Faced with an unprecedented health crisis that disrupted the lives of millions of people and required the implementation of binding measures to deal with the spread of COVID-19, UNOWAS, like all major actors in West Africa and the Sahel, had to quickly adapt to a crisis which is now global!
As a Special Regional Political Mission covering a geographical area as large as it is complex, it was vital for UNOWAS to act on three priorities: the first was the urgent need to ensure the protection of UNOWAS staff, the second was the need to support countries and partners in the sub-region, and the third priority was to ensure the continued implementation of UNOWAS’s mandate.

Following the directives dictated by the United Nations headquarters, the United Nations system based in Dakar, as well as the measures taken by the Government of Senegal, UNOWAS, from the very beginning of the COVID-19 crisis, took the necessary actions to ensure the protection of all its staff.
Like many actors based in Senegal, the announcement on 23 March by President Macky Sall of a state of health emergency with a curfew and a series of precautionary, often restrictive, measures to deal with COVID-19, propelled UNOWAS into a new form of work, now unavoidable: The telecommuting. 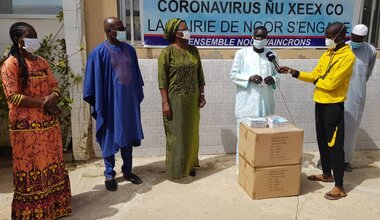 «Stay at home» has become a global watchword for saving lives and stemming the dizzying spread of Coronavirus. But despite the closure of borders and the implementation of ‘barrier measures’, UNOWAS has remained fully engaged with countries in the sub-region and its partners to provide the necessary support in this time of crisis.

One way to do this was to use ‘the virtual” to continue to act on the real. Against a backdrop of laughter, children’s cries and unusual noises, UNOWAS staff learned to master Zooms, Teams and other digital communication tools that allow UNOWAS, like other regional and international partners, to stay connected and maintain working relationships with all its partners and stakeholders.

From the very beginning of the crisis, UNOWAS, through the Special Representative of the Secretary general for West Africa and the Sahel (SRSG), Mohamed Ibn Chambas, has maintained and increased exchanges with countries and partners in the sub-region, including those of the United Nations system and civil society organizations, in order to renew its commitment and solidarity in these difficult times, and to demonstrate its determination to pursue its mission of conflict prevention and peacebuilding.

In order to assess the impact of COVID-19 on the countries of the sub-region and to undertake concrete actions in support of the measures already put in place by various governments, UNOWAS has multiplied meetings and consultations with the Resident Coordinators of the United Nations and within the United Nations Group for Sustainable Development for the West and Central African region, as well as  with civil society partners and regional actors to support efforts against the spread of the virus, while continuing to address the still persistent challenges related, inter alia, to the organization of peaceful elections, the respect of human rights, and the role of women and youth in the consolidation of Peace and Security in West Africa and the Sahel.

ECOWAS and UNOWAS stressed the importance of the strength of regional unity against the pandemic, and recalled the need to respect human rights

In addition, UNOWAS continues to build an ever-closer regional partnership with ECOWAS, a traditional partner. Illustrated in a joint Op-ed in which the two heads of ECOWAS and UNOWAS, Jean Claude Kassi Brou and Mohamed Ibn Chambas, stressed the importance of the strength of regional unity against the pandemic, and recalled the need to respect human rights. This partnership also manifested itself in a recent message from the Special Representative on the occasion of the 45th anniversary of the founding of ECOWAS, whose celebration under the theme: «45 years of solidarity in the service of the peoples of West Africa», fully echoed the message continuously carried by UNOWAS in this crisis that we are experiencing.

Redoubling efforts to strengthen  solidarity and coordinated response to the COVID-19 pandemic, which has increased poverty, unemployment, food insecurity, lack or absence of access to water, health and education services, The SRSG also undertook meetings at the international level during which he discussed with the Special Envoys and Representatives for the Sahel of the European Union and various countries, the socio-economic impact of the pandemic and the means to be implemented to support the efforts of the countries of the sub-region.

Other important meetings with officials from various governments and political actors contributed to strengthening UNOWAS and United Nations solidarity with the authorities and peoples of the sub region. Indeed, this unprecedented situation has not prevented UNOWAS from continuing its work and intensifying its efforts to assure its partners of the continuity of its commitments.

Beyond its role as mandated by the UN Security Council, UNOWAS, in coordination with national, regional and international actors, continues to promote messages of solidarity, regional unity and responsibility. It’s only by acting together that we can  defeat COVID-19.

This article is published in the UNOWAS Magazine N11 -> Download here